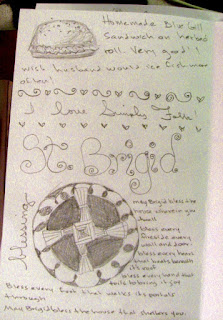 Today's page, about the fish sandwich made from the Bluegill husband and son caught at the fishing derby yesterday.

Also I am listening to Simply Folk which is a three hour program on Sunday nights here in Wisconsin.  Folk music is definitely my favorite genre.  They spoke of tomorrow being St. Brigid Day or the Celtic first day of Spring.  So I added a St. Brigid cross and house blessing.
Posted by Unknown at 5:17 PM No comments: 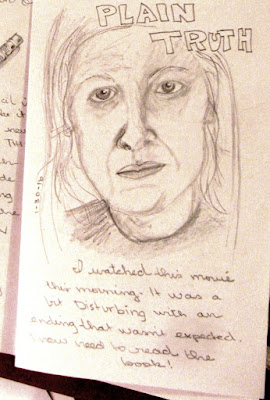 Page 2 of the zine.  I did it about the movie called Plain Truth.  I found it really different.  This is Sarah Fitch, the mother.  We have an Amish community here and this movie portrayed Amish more as they are rather than those sappy strange Amish romance types that are too full of "englisher" things.  Plain Truth was more believable in costuming and make up.
Posted by Unknown at 5:09 PM No comments:

Mandy's suggestion was to draw and describe our favorite pencil.  So I pulled out my Ticonderoga and drew it.  The problem is I don't have a sharpener so I can USE it.  BUT if I did this is the pencil I would be using.  :)

In the meantime I am using my Daler-Rowney 2H which is good for light sketching but not for actual writing or shading on a drawing.  SO I need to go back and touch this one up to make the pencil look better and anchor it into its shadow.  I also plan to decorate the boxy "Page 1" at the top.
Posted by Unknown at 5:01 PM No comments:

Last year on a whim I joined an online zine subscription called Secret Message Society.  To be truthful I don't really know what it is beyond the front of the website because my internet is slow and stupid.  Mandy is an artist and I like to support artists.

Last year the zines were the zodiacs.  This month she sent a zine about making a zine.  The first project is to get 4-5 pieces of printer paper, fold them in half and create a cover.  Her suggestion is to "try drawing a Royal portrait for your cover. *caution-this will feel vulnerable."  So last  night I created my cover, LOL.

This is me (well, sort of...I am not good at people which means I need to draw more people) and my rooster Vladimir from a selfie I took of us.  In the photo I am smiling.  Here I look stunned, LOL.  Anyway, I then added a crown.  It is suggested that this zine is to be done in pencil for those who feel they need to erase (me included sometimes though I am getting bolder) but I may just add some color to this.  Time will tell.

I feel it needs a caption or title.  Perhaps "Oh No! A Fowl Woman!".

Does it seem strange that a 54 yr. old woman is making a zine?

You Are An Artist 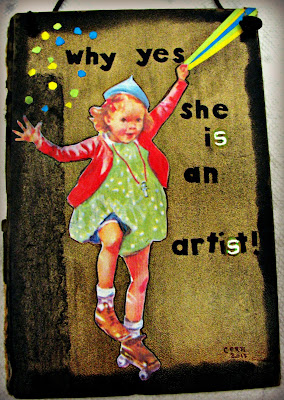 I joined a challenge swap where the requirement was to make a piece of art out of an old book cover.  I went to the local thrift store and purchased a few old books that looked as though they had seen better days and dismantled this one.

The image is a scan of an old Dick and Jane book and the lettering is vinyl lettering I spray painted gold over then peeled off to reveal the black underneath.  I had run out of "S" so I used raised letters I had collected.

The "power beam" and confetti is just made of scrapbook paper that matched colors in Jane's outfit.

My recipient loved it!  I still have the back side and plan to make more of these fun projects.

This post is linked to Vintage Charm Link Party.
Posted by Unknown at 5:03 AM 4 comments:

It is at times like this that I miss my dogs.  For 25 years I had an Australian Shepherd to trip over.  First it was a cast off, Silly.  Then I bought a preplanned well bred dog from Texas aptly named Tex.  He ended up with cancer in his hip and at age 12 I had to put him down.  It was already 1 1/2 yrs. ago but it seems like yesterday.

After I had gotten Tex I had gotten another rescue, Ty.  He was the homeliest most ill built Aussie but smart as a whip and a mind of his own.  The biggest problem with him aside his roaming ways which out here isn't a big deal since our closest neighbor is 1/2 mile away, was his heavy coat.  He was impossible to keep brushed out as burdocks and stickers was what he liked to travel through.  And despite tick medication and collars and I apparently not finding every deer tick, he ended up with Lymes and Anaplasmosis at the same time.  He didn't recover from the Anaplasmosis.  I was heart broken and guilty and just decided no more dogs.

Well, a customer on mail route asked me if I'd be interested in a cattle dog pup.  I surprised myself by asking him about the dogs.  He has the nicest and smart cattle dogs that are friendly and well mannered.  A lot of them around here I wouldn't trust with a 10 foot pole.  Is it poor breeding or poor upbringing (I highly suspect the latter)?

I do not want a dog I cannot trust to be loose on the farm and around people.  I have a friend who has one she has to put into a horse stall when she leaves town as she doesn't trust it to not go after the person farm sitting.  She understands the dog can be a problem and isn't afraid to admit it.  If I had a nickel for every time someone tells me their dog won't bite I'd be rich.  As a mail carrier dog bites are the #1 threat on the job.  I have been around dogs, I have been bitten by dogs.  I can read them pretty well and old Fluffy snarling and snapping at me may not bite you (or surprisingly may but you know it isn't the dog's fault, so n so made them mad or whatever excuse they use) but my gut says otherwise.  I will not have a dog like that if at all possible.

This is one reason I haven't gotten a dog as I know what the first two years are like with socializing and training and molding that dog into a fine canine citizen.  I could take my dogs anywhere and never had to worry if someone wanted to pet them.  It is a good feeling to know I was promoting the Australian Shepherd in the best light but it didn't happen by magic.  There was hours of work, sweat and yes, tears of frustration.

I  surprised myself by saying keep me informed as yes I am interested.

One thing about cattle dogs is they are short coated.  Something I can feel I can take better care of.  Also since Ty's passing there have been alternative treatments for ticks.  But just the idea I can comb through a short coated smaller dog easier makes me feel better.

I would like a dog I can use on the cattle.  My dogs have saved me miles of footwork when it comes to the cows.

Anyway, this is one of the portraits of my dogs I have done.  I haven't finished the one of Tex yet and it sits 3/4 the way done waiting for the right time.  It still miss him, esp. every time I take a walk.  Losing a dog is difficult yet a necessary part of the experience.  And chances are this next dog, if he or she comes, will be my last.

This post is linked to Treasure Hunt Thursday.
Posted by Unknown at 3:48 AM 2 comments: 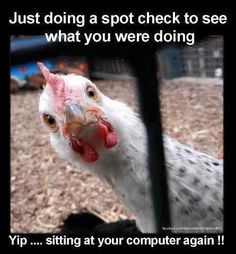 After work I went to our "local" Walmart which is 24 miles away.  I want to do an embroidery that a blogger kindly posted for anyone to use.  I thought it would be cute for my friend's sewing room.  She has been diagnosed with leukemia and I like to try and brighten her day with little things.

What a wasted trip.  They had no white fat quarters and I'm not about to buy fabric off the bolt for one little project.  Additionally no one was in the section so that would mean hunting someone down if I did want to.

Of the five colors of floss they only had one!  And surprisingly it was the red #666 which I figured as conservative and christian this town is would be outlawed, LOL.  I mean someone proposed to change the addresses of every house that had any form of 666 in it.

5" hoop?  Are you kidding?  We have 4" or 6".  Ugly plastic.  I'd prefer wood as the picture is framed in a wood hoop.  Ok, I could deal with that but if I can't get the rest why buy the hoop and needles needed?

They drove our little sewing and craft store out of business and then turned around and don't carry as much as they used to so they can expand into more a little of this and a little of that and a bunch of junk no one really needs.  My opinion of course.

They didn't have picture hanging things either, just the wire.

Places I Hang Out At